hey. since people are stuck inside I thought I’d drop some coloring book pages here. a few people asked about it and I think my drawing style is very well suited to that type of thing anyway. I’ll update this throughout the day and beyond. if you don’t want to read all this, the hand emojis with the green square 🟩👉 have links to the pdfs you can download and print.

normally I’m kind of a perfectionist and try to make things perfect but I thought as it’s a unique situation I’d let that go for a minute. this set of mockups I did for a kid’s book I’m working on would be perfect for kids stuck inside, or you. it’s from a series I’m working on where this character, tiny bishop (he’s a tiny bishop) tells stories about the saints from a book called the golden legend that was very popular in medieval times. this is the beginning of the story of st. eustace, where he gets converted from paganism to christianity by a vision in the forest. i’m sure you can find the story online.

he’s an interesting saint that gets associated with hunting and hunting laws later on as his vision occurred while he was hunting deer. it’s also very iconic, it’s actually the source of the jagermeister logo (not going in the kids book) and there’s lot of artwork of him seeing this luminous cross between a deer’s antlers in the woods you can easily find on google. it may also be interesting for kids to start here and then find the rest of the story themselves. there’s some cool twists and turns where his family gets taken from him and then they get reunited. heads up that at the end they all get pretty brutally martyred so, may want to plan on if and how you’d discuss that.

🟩👉here are those images below as jpgs and here as a pdf: eustacecolor2 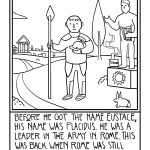 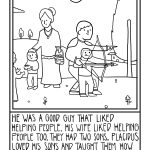 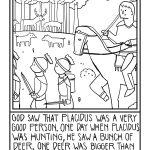 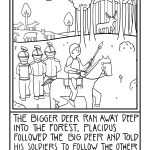 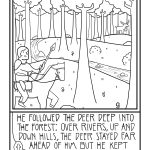 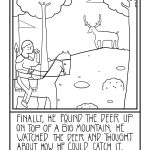 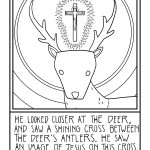 then i have this other set, this is some of my illustrations and drawings put in coloring book format. like I said I’ll update this as we go so, let’s call this the first seven, set number one.

there’s two of the tapestry style image, one with and one without the caption, in case the first one with the caption is too small for coloring with whatever tools you have.

(if you want to keep the kid / theology energy going from the above post these all tie in with religion and theology and mysticism in some way, although they weren’t made for kids explicitly. the first bird image was inspired by matthew 6:26. the sixth image has some explicitly esoteric and occult imagery so depending on your vibe, just thought I’d give you a heads up there. the last image of God the father is taken from a medieval book of hours, which is another interesting topic kids could look into). 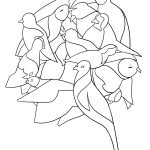 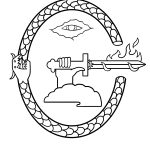 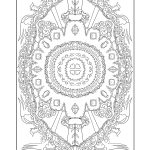 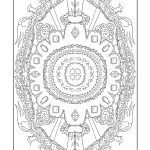 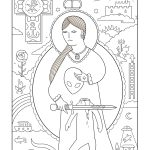 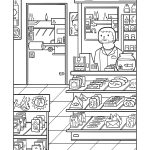 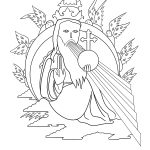